An introduction to Brazil, Mexico, Chile and other exciting markets

RRP: £5.00
Price: £5.00 Volow Online eReader
FREE with Volow Monthly, find out more.
Start reading now*
Latin America is much more than football and beaches. A continent of 600 million people enjoying a period of strong economic growth is now attracting worldwide attention for its amazing opportunities. But are UK small businesses making the most of these opportunities? If not, what is stopping them?

Gabriela Castro-Fontoura, a native Latin America with wide experience in the UK, shares in a simple and friendly manner, what every UK SME needs to know about doing business with Latin America - the geography and the people of a fascinating continent; the exciting range of opportunities, as well as honestly exposing the barriers and how to handle them.

From business etiquette to import barriers, from currency issues to multilingual ecommerce, Gabriela explores the wealth of information out there, interviewing key business owners and experts, and translating this into a thoroughly researched yet very user-friendly book, with British efficiency and Latin American charm!

A small business owner herself, Gabriela knows how to talk to her audience - and inspire them to a journey full of possibilities.
ISBN: 9781908003553
Collections: 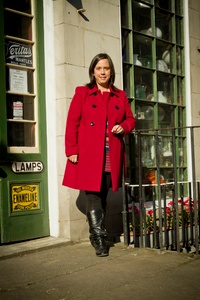 Gabriela Castro-Fontoura was born in Montevideo, the capital city of Uruguay, in South America. From a very young age, Gabriela was fascinated by other cultures. After achieving the top score in the International Baccalaureate Diploma, she was offered a rare scholarship to study Economics at the University of Durham in the UK. That was the start of a long love affair with Britain - living in England, Scotland and Wales for over 13 years. After 10 years of working as a consultant, Gabriela set up her own business - Sunny Sky Solutions - with the aim of acting as a bridge between businesses in the UK and her native Latin America.

Through Sunny Sky Solutions, Gabriela has supported businesses at all stages of expanding into Latin America. From those that hadnâ€™t even considered it to those that had done some research to those that were already present in the continent. As a process expert, Gabriela has supported businesses in various sectors such as energy, food and drink, and nursery products, being a strong supporter of British manufacturing and a great believer in the potential of British SMEs to export their goods and services. Her services have been used not only by UK businesses but also by those from other countries such as Spain and Australia.

A prolific communicator, Gabriela has presented on doing business in Latin America at various events such as those organised by local Chambers of Commerce across the UK, UKTI, the Institute of Export, and StartUp Britain. She is often requested to write for trade press, such as Global Trader Magazine and Lloyds Loading List, and contributes regularly to popular business blogs. Her twitter feed has now a loyal following who not only keep up-to-date with news and developments but also benefit from a forum to exchange views and experience, and connect with other experts and businesses.
As a native Latin American, Gabriela always emphasises the importance of win-win in international trade. She has great belief in the potential of Latin America to grow sustainably, and insists on working only with those businesses that have something to offer that will improve the quality of life of her fellow Latin Americans.

Exciting times for Gabriela, too, since in January 2013 she relocated back to Montevideo, after 13 years in the UK, with the aim of supporting British businesses from within the continent. As her expertise and contacts develop from her strategic South American base, Gabriela will continue to share with us news, advice, tips and anecdotes from this wonderfully rich continent.
* Login required, if sample is not available, a subscription/purchase is required. Please see our Terms & Conditions for more information.